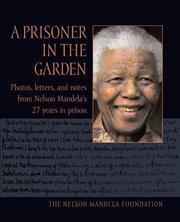 A Prisoner in the Garden

As moving and inspirational as its predecessor, A Long Walk to Freedom,Prisoner in the Garden digs even deeper into Mandela s prison years. This groundbreaking book is an international publication event. It is being published by Penguin South Africa, UK, Canada, and USA. Rich in imagery, Prisoner in the Garden provides compelling insight into 4/4(9). An extraordinary visual journey documenting Nelson Mandela's twenty-seven years in prison on Robben Island, Prisoner in the Garden contains previously unpublished images, documents, and diary and letter extracts, as well as some original notes from the writing of Mandela's bestselling autobiography, A Long Walk to Freedom, and other archival material that helps illustrate/5. This book is bursting with story. The records of Mandela’s confinement are widely scattered – in conventional archives and some surprising personal collections. Readers will learn about chance discoveries and dead ends, crossing paths and painful reminders. A Prisoner in the Garden documents one part of that struggle. This magnificent book, published in partnership with the Nelson Mandela Foundation, reveals for the first time the intimate details of Nelson Mandela's life in prison. Between the covers of this handsome, full-colour book you will catch glimpses of Mandela's notebooks, his diaries and personal correspondence.

It depicts a media visit to Robben Island. There are pictures of prisoners tending the garden while incarcerated. This volume has many memoirs, oral accounts, artifacts used by Nelson Mandela, structures named after him and the official record of the Presidential tenure. A copy of the prison release is contained in the book.4/5(9).   This book is an excellent guide to starting and running a successful prison garden. People who are locked up in jail for long periods of time often lose their souls while they're "in" and gardens are perhaps the most effective way for them to regain a sense of 5/5(1). With bright eyes he spoke of the fellowship that he enjoyed with the Lord in the prison cesspool. Standing before the huge crowd, the small Chinese pastor began to sing the song that he used to sing in the prison sewer. I come to the garden alone While the dew is still on the roses And He walks with me and he talks with me. The prison’s unspeakably horrid conditions were suffered by ALL Christian ministers in a brutal effort to choke out any other belief other then c ommunist propaganda. For over 18 years of starvation and torture Chen learned what true greatness is all about.